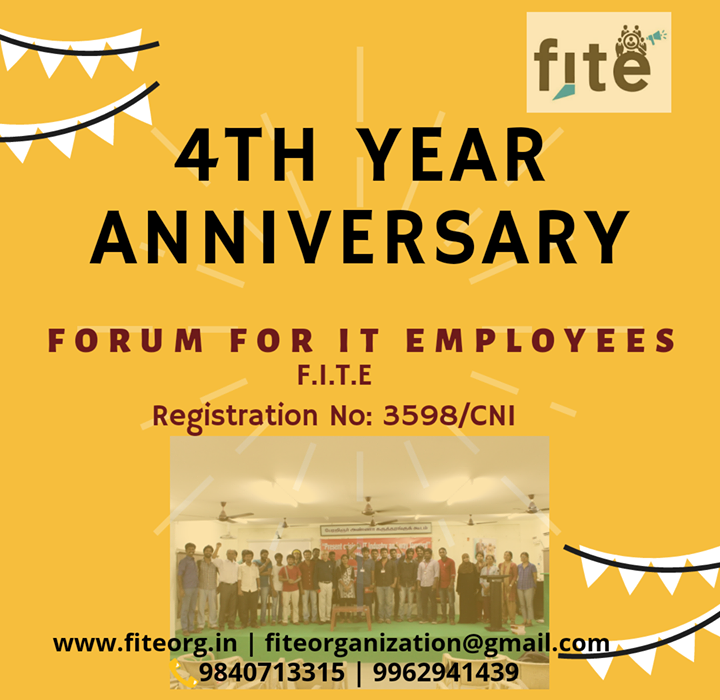 It was this day, December 29th, 2014 that Forum for IT Employees (F.I.T.E) was launched at Chennai. When there were hundreds of employees ruthlessly made to resign their job by force, employees from various companies strung together into a forum to question it. At Delhi, Chennai, Mumbai, Hyderabad, Kolkata, wherever employees were victimized, F.I.T.E organized them, fought the company at court and brought these ‘forceful resignations’ to a temporary halt. All the time we had been lessoned about how team work results in better project delivery. But this time team work resulted in invoking our rights. Our collective rights!

Fast forward 4 years to today. The labour office at Chennai and elsewhere in the country have pending disputes. What disputes? IT Trade Unions with their member employees from various IT companies are petitioning the government authority that their employer doesn’t obey the laws of the land. Employees are joining together and questioning the injustices happening at workplaces in a loud and clear way. Corporate IT industry thrives on individualization of the 32 lakh workforce. But it was a historical necessity that we came together to break that individualization. Now we have a way and we all know what to do when are subjected to injustice.

Not just forceful resignations, various employee related issues had been handled and settled in these past 4 years. Confiscation of original documents of the employee, pending salaries, revenge of the employer on the employee who is resigning, consultancy frauds harassment, ladies hostel problems are some of them. Apart from mitigating the problems faced by the workforce It represents, a Trade Union’s responsibility is also to mobilize the workforce against the general injustices happening in the society. Tamil Nadu has a boiling political situation for the past few years and our IT and BPO Employees did not fail to organize themselves under FITE to show their responsibility towards creating a democratic society. The protest against Sterlite shootout at IT corridor resisting the threat from police department being the recent demonstration.

Last year we became the first ever IT union to be registered under the trade union act. The Government of Tamil Nadu provided registration status to F.I.T.E and our registration number is 3598/CNI. Thus we are marching forward. Our march will ensure just, righteous, democraric workplace. Happy fourth year anniversary to all of us.

Forum for IT Employees – Tamil Nadu