Sign in
Home Activities Let the Workers and Farmers General Strike on Nov 26 be a spark of the new dawn! – Solidarity Message from FITE 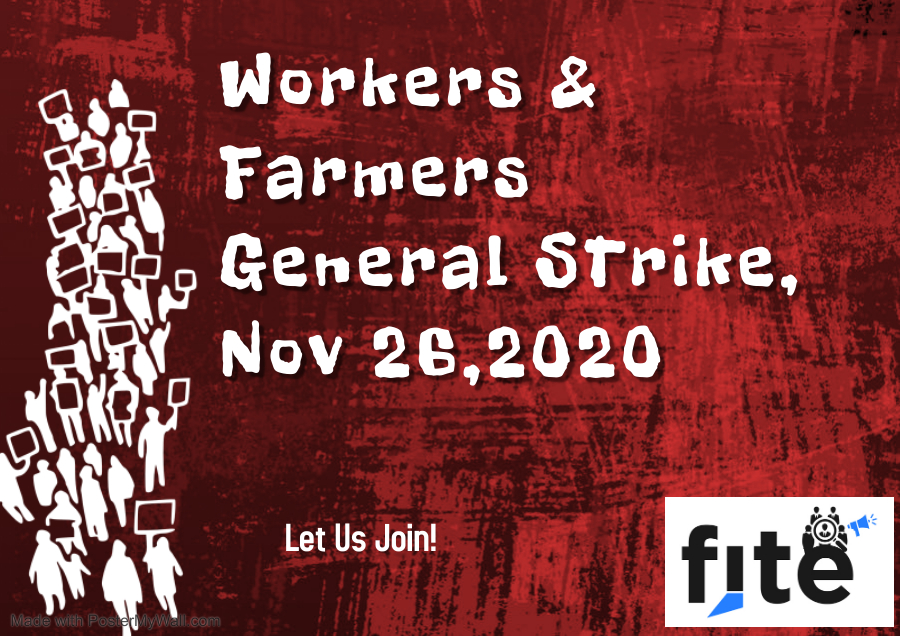 On November 26th, the constitution day, the workers and farmers across India are on the roads challenging the most offensive pro corporate labor and farmer law reforms brought in by Mr. Modi’s government! These pro corporate labor and farmer bills were passed in hurry without following the democratic process when the parliament’s normal functioning was stopped due to covid19 pandemic and lockdown. When migrant workers were marching towards their homes by walk and most of the unorganized workers were at home suffering without any income and workers of organized sector like IT were squeezed in the name of work from home and entire people of the country under Covid19 pandemic fear and nobody was in a position to show their resistance, Modi government had passed these anti-labor and farmer bills! This is the biggest challenge to the democracy itself as well as to the rights won by the sacrifice of the workers and farmers of the country! This is the fifth workers general strike in six years of Mr. Modi’s regime! Unlike other strikes this time farmers of the country joins the struggle!

The economy of the country was in trouble even before pandemic due to various widely criticized economic measures including demonetization taken by Mr. Modi’s government. Now the economic crisis has deepened. Lakhs and Lakhs of unorganized as well as organized sector workers lost their jobs! The educated youths are not finding suitable employment! The unemployment crisis is at its peak! The unemployment among engineering graduates have become a source for a cheap labor force for the IT Industry. The workers of IT sector, from one among the few sectors which has seen unexpected growth even during pandemic, are not the full beneficiaries of the growth of the sector instead they too faced mass job losses even during the pandemic from the merciless profit driven big corporates like CTS, Accenture etc.,

The new farm laws have been brought in to facilitate the entry of big corporates into farming sector but in the name of protecting the farmers’ rights! With the help of new farm laws, corporates and their profit driven, export driven farming policy is going to decide what we have to eat! If the price and hoarding of essential farm produces are not controlled by our governments, then food security of the people will be a big question! So new farm laws are not just farmers’ problems, it is the question of the food security of crores of people in the country!

The corporates are the borrowers of big loans from public as well as private sector banks and most of them have not repaid the loans and become defaulters, but Mr. Modi’s government is planning to give them entry into commercial banking sector to loot the ordinary working peoples’ money deposited in their banks!

Through the Labor Laws 2020, Corporates are given free hand to hire and fire with the help of the Fixed Term Employment and exempting the establishments with below 300 workers from prior permission to closure, layoffs, retrenchments, standing orders which defines the working conditions. In order to attract the investments, the state governments are allowed to exempt even some hazardous factory from Occupational Safety and Health act.

When the Modi’s government diluted the labor laws into four codes, NASSCOM, the association of IT companies in India has given several recommendations for amendment in order to facilitate the new work from home model as they expect around 60% employees in next few years will be into WFH model.

One side Modi government has planned to provide social security for the gig workers, platform workers and in the name of WFH, NASSCOM has planned to convert the permanent IT workers into gig workers who can work in their flexible time at home and work for more than one employer at a time! So, they want the exemption from giving 21 days prior notice to change the service conditions as per labor law!

When Modi government brings in a change to defer or reduce the employer’s or employee’s contributions (under PF and ESI) for a period of up to three months in the case of a pandemic, endemic, or national disaster, NASSCOM recommended to exempt IT industry from Provident Fund and ESI Act as around 60% of employees will be working from home. So, what about the remaining 40% employees working in the office premises?

While it is not certain about the fact that how much of the workforce in the IT sector is going to be engaged in the WFH model, NASSCOM has recommended for several serious amendments/exemptions of laws. It has recommended for exemption from Occupational Safety and Health as most of the employees are going to work from home when many IT workers suicides happen due to work related stress. Likewise NASSCOM seeks exemption from providing the crèche facilities to working mothers from Maternity Benefit act.

We are seriously in a very challenging time. The pandemic and economic crisis are used by the capitalists across the world to snatch away the rights won by the sacrifice of workers and farmers centuries ago. While Mukesh Ambani have become 4th among the world richest persons from 40th position since 2014, the daily wage of India has been increased from Rs.137 to Rs.178 only. This shows us that these governments are working for whose benefits. If we don’t unite and raise our voice at least now, we will be under corporate slavery, a new normal!

FITE calls upon the IT and ITES workers to join the General Strike on Nov 26, 2020 and make it a big success!

Let the strike strengthen the unity of the toiling workers and farmers and be a spark for the new dawn!

Provide monthly relief Rs.7500 to the families which lost their income due to Corona Pandemic

Withdraw all the anti-labor & anti-farmer laws