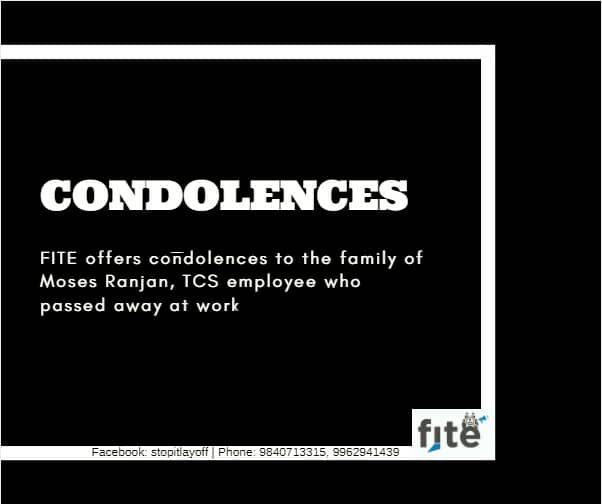 On the fateful night, Moses was involved in a conference call with the on-site team in the U.S. Since he became silent during the course of the call, the on-site team informed to an offshore team mate to reach out to Moses. When he reached the desk of Moses, he witnessed Moses lying on the ground suffering from fits. Baffled by the scene, the team mate tried his best to recover Moses from fits and had also immediately alerted the security guards. Meanwhile Moses had fainted and also suffered fits for the second time.
The ambulance had reached the tower after 15 minutes of all these happenings. With the help of security guards Moses was boarded on to the ambulance. There was no doctor or nurse available in the ambulance to provide necessary first aid to Moses or to check his pulses and blood pressure. Since there was nobody else to accompany Moses to the hospital, the team mate had accompanied Moses in the ambulance. Unfortunately, Moses was declared ‘brought dead’ at the Chettinad Hospital.
This IT sector yields tremendous foreign exchange to the country and is responsible for more than 25% of country’s exports. It employs directly and indirectly crores of country’s youth population. In the IT campus present in SIPCOT, Siruseri, Chennai, around 50,000 employees work in the day and 5,000 in the night. Without realizing day and night, IT workers work for extended hours due to workload which leads them to stress. Many times they skip their meals and are also deprived of adequate sleep. Due to this they fall prey to depression and fatal disorders such as Heart attacks at younger ages. When the IT companies have got exemption from labor laws which facilitates them to extract work out of employees 24*7, why haven’t they set up appropriate medical facilities round the clock to safeguard employees’ lives? Why isn’t the Labour department taking notice of this? Moses would have been there with us by now had he been treated the first time he suffered from fits. Is this the responsibility the companies have towards their employees numbering in lakhs who give up even their lives, health, time with their families for the sake of these companies who operate solely on profit interests?

The postmortem report of Ilayaraja, Infosys Mahindra City employee who was recently found dead near the company’s rest room also confirmed that he was dead due to heart attack and fits. There has been no full fledged research done on the disorders arising out of workplace issues (occupational health hazards) nor there has been any holistic plan implemented to safeguard the health of IT sector employees on part of the government. Forum for IT Employees condemns the TCS administration for its irresponsible attitude towards the employees and failing to install necessary medical equipments and aid centres needed especially in times of emergency situations.
We place the following demands,
To the Government of Tamil Nadu,
Take strong action against TCS company for failing to provide necessary emergency first aid treatment thereby failing to protect the life of Moses Ranjan Raj who suffered from Heart attack and fits at workplace.
To the TCS Administration,
Given the fact that Moses had lost his life while at the time of discharging his duties, provide adequate compensation to his family keeping in mind the future of his wife and children.
To the Commissioner of Labour,
Conduct inquiry on the death of Moses Ranjan Raj who died due to inadequate first aid amenities at workplace.
Make the companies accountable to all the incidents bothering the safety of the employees at workplace.
Ensure that the companies strictly implement labor laws including 8 hours of work per day.
To the IT companies,
Make it mandatory to have 24*7 free medical aid centres in all your workplaces.