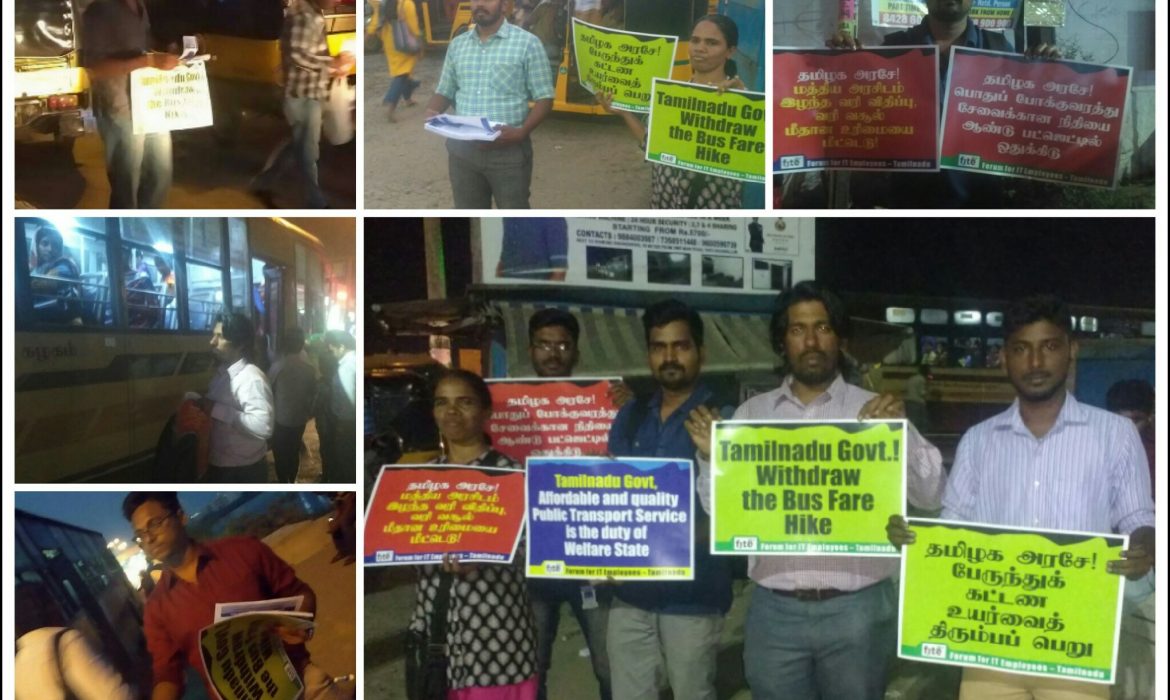 The Tamil Nadu bus transport sector which is left today in a sorrow state was once at the hands of the private. In 1971, the Tamil Nadu government passed an act that made Bus Transport, a government enterprise. Farmers were empowered to sell their goods from villages to the markets present at cities. Students from remote villages were empowered to reach schools that were present far away. Workers were able to reach their far-off work locations by spending little amounts. Thus the positive transformation which the public bus transport service brought about in the socio-economic sphere of Tamil Nadu is immense. It is also to be seen that thousands of employees in the IT/ITeS and other sectors at OMR are thoroughly benefitted due to public bus transport service.

The public transport service, the most important contributor to the social and economic life of the people of Tamil Nadu, now, what is reason for going into the situation of not even to pay workers’ pension money and unable to recover its crores of worth properties belong to its transport corporations from mortgage? Rampant corruption, activities of politicians who side with private bus operators, insufficient fund allocation for public transport service in annual budget are only some of the many reasons that has led to the present crisis.

By pointing the fingers towards the salary hike of the transport workers, the price rise for spare parts and other reasons, the government is not only trying to justify the price hike but also is covering up the actual problems.

1) Give back the thousands of profitable bus routes to Government buses which are now being handed over to private bus companies.
2) Stop the interference from local politicians who pressurize the administration to act in favour of private bus owners.
3) Thousands of acres of land which are in possession of the transport sector should be used for commercial purposes that would yield revenue.
4) Minimize the number of higher authorities in the sector which at present has 15 Directors, 80 General Managers and 120 Assistant Managers
5) Stop the irregularities and corruption that is happening at all levels from acquiring new buses and spare parts to appointment of workers and officials
6) More than 30 lakh economically backward students are benefited because of free bus transport. This is an important contribution by bus transport towards the state’s literacy rate. The Tamil Nadu government should bear this cost.
7) Public Transport is a fundamental necessity of all common working classes. To ensure safe travel at low costs, 2000 to 3000 crores of fund should be allocated to public transport in annual budget.
8) Stop the frequent and unjustified price rise of petrol and diesel by the Indian Government. Petrol/Diesel must be provided at subsidized prices to bus transport.

Our demands to the Government of Tamil Nadu:
1) Roll back the bus tickets’ price hike which has heavily impacted the lives of common working classes.
2) Implement the suggestions provided by Trade Unions and experts in recovering the losses of the transport sector
3) Include Trade Union representatives in the administration of the transport corporations.
4) Allocate necessary funds that is required for public transport service to provide safe and secured travel.
5) Settle the PF and other dues pending to the workers of transport sector.
6) Importantly Tamilnadu government has to restore its lost rights on Taxation and Tax collection from central government

Forum for IT Employees – Tamil Nadu Chapter demonstrated a pamphleteering campaign at OMR IT Corridor – Sozhinganallur on 24th January (Wednesday) amongst IT/ITeS employees emphasizing the above demands.