FITE in solidarity with protesting workers of Greaves Cotton Limited 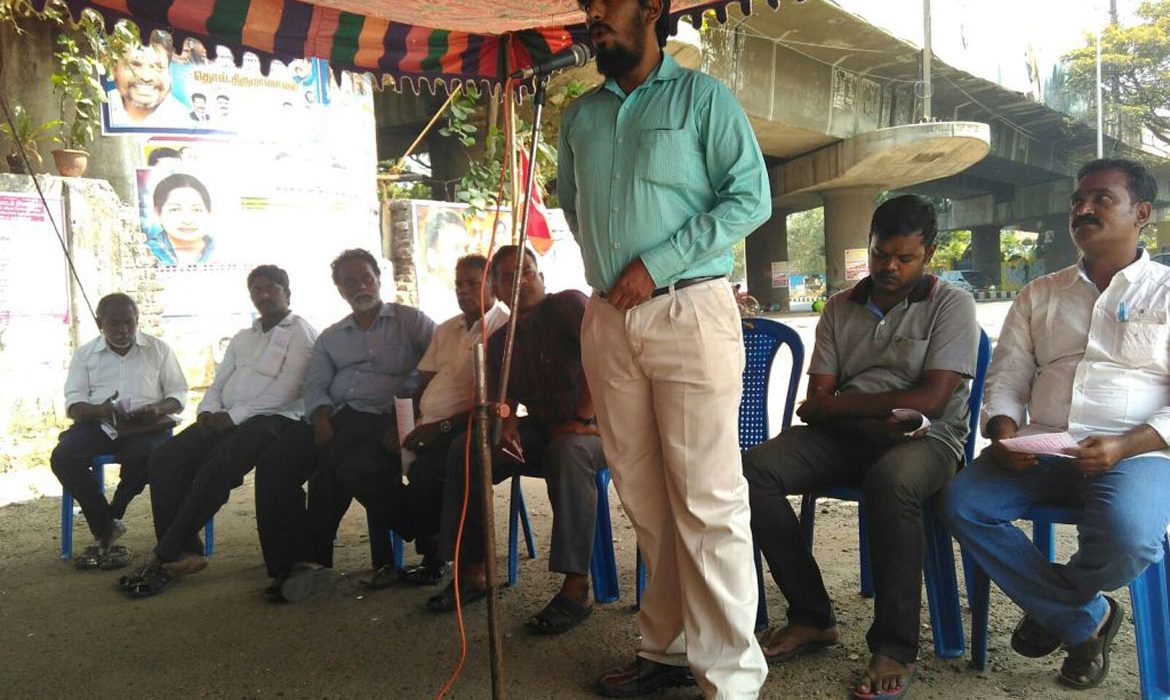 Sunday, 24th of January 2016 saw a vibrant protest near Chepauk Stadium, Chennai. More than 100 employees of Greaves Cotton Petrol Engine Unit participated in the day long protest organised by DTUC – Democratic Trade Union Center. Leaders of various Trade Union across the state of Tamil Nadu also participated in the protest and addressed the protesting employees and expressed their respective union’s support. There have been various issues and victimizations faced by the employees of Greaves Cotton Limited which we have listed a little later in this report. FITE – Chennai Chapter team attended the protest and expressed FITE’s solidarity with the protesting employees. We addressed the employees and made them aware of the problems faced by employees of IT and ITES sector. We vowed to support their struggle in the future as well and stand with them shoulder to shoulder until their demands are met. President of DTUC and President of Greaves Cotton Trade Union, J. Chidambaranathan thanked and welcomed our participation and saw us (FITE) as a bridge that connects employees of other sector and IT, ITES sector.

The company Greaves Cotton Petrol Engine Unit is based at Gummindipoondy and the employees have been protesting in that place. It is important to note that they have now come to Chennai to make their problems get the vicinity of majority section of people and have their problems be heard by the state government. We, the Chennai Team have observed the grievances of the employees of Greaves Cotton and are bringing it to the notice of members of FITE present across the country. The grievances are as follows, please have a look at them.

1) 26 Probational employees who actually should have been promoted to the position of permanent employees are now dismissed illegally for the reason that they have joined trade union of Greaves Cotton.

2) Despite the Trade Union requesting several times the management to fix the unsafe workplace environment at the factory, it is still not fixed.

4) Since the unsafe environment of workplace is not fixed and remains the same, the Factory Inspector has lodged a case at the Thiruvallur Criminal Court and the case is pending. Even after that, the management is negligent and has not taken the issue of employees’ safety seriously.

5) ”Contract Employees” are being appointed in jobs that are permanent in nature which is an illegal mode of production. As per law, those contract employees who have been working for years together as “Contract Employees” itself should have been absorbed as “Permanent Employees” which the company has not done and there by indulging in cheating.

6) Youngsters who have completed B.E and M.E are appointed as “Apprentice” but are made to work in direct production. Later in 5 or 6 months they are being terminated thus posing a threat to their career.

7)For the sole reason that they have started a Trade Union; the management as an act of revenge is now trying to shift the production machineries like Engines and Agriculture instruments from this factory at Gummidipoondi to the factory at Ranipet which is also part of the same Greaves Cotton group.

8) For the above stated reason, the management is threatening the employees of Ranipet to disengage from their Trade Union.

10) Without accepting the rightful demands of the employees, the management is cheating the employees by lying that it is incurring losses.

11) We, The employees of Greaves Cotton sincerely request all citizens including all working people, all the Trade Unions and all political parties to give us your helping hand in this time of despair.