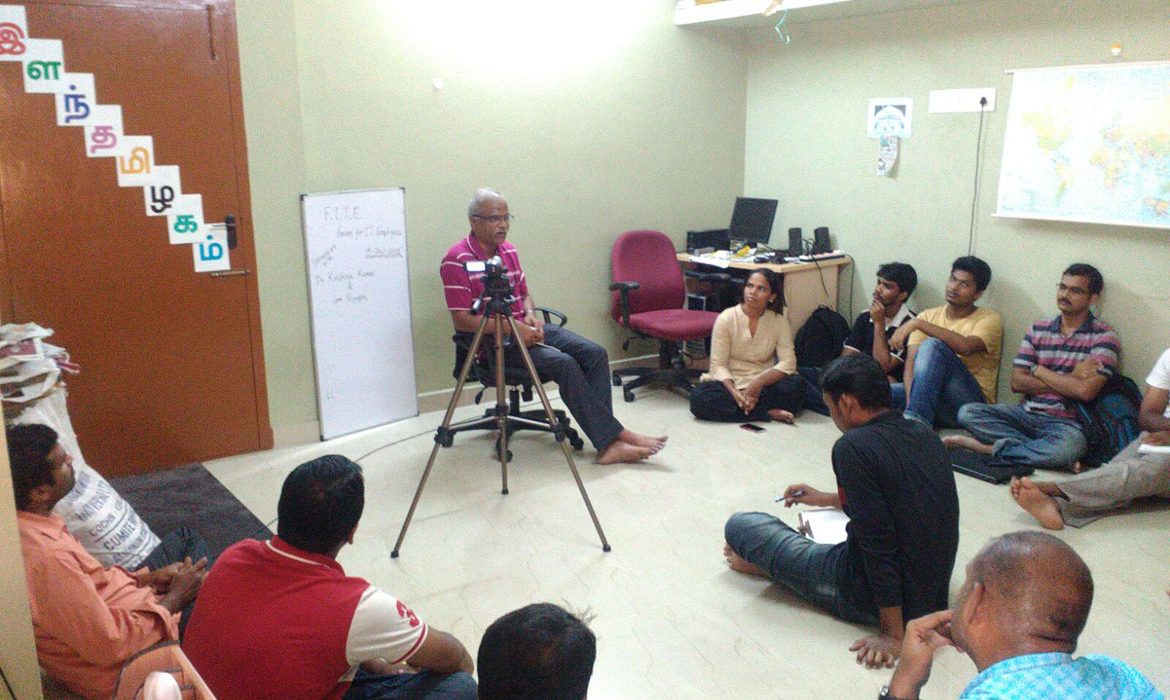 In an endeavor to empower employees, We – Forum for IT Employees – Chennai Chapter conducted a session on “Trade Unions” at our office at Velachery.  The session was attended by FITE members, students and the rights activists. Comrade. Vijayan, a champion Trade Unionist conducted the morning session. He gave a historical perspective of how various TUs in the past had managed to win rights for their employees. He recollected the struggles made by the Madras Labour Union – one of the first organized labour Unions of India that was formed by Comrades B.P Wadia, Chakkarai Chettiyar and others in 1918. Printers Union formed in Kolkata in 1905 and the Bombay Postal Union that was formed in 1907 were preludes to Trade Unionism in India.  He acknowledged the fact that building Trade Unions and organizing workers is more challenging in today’s environment than any time in the past but is the need of the hour. The reasons that lead him to such an acknowledgement was the increase in relaxation of labour laws and the plight of uncertainty in job continuance faced by employees of IT and ITES industry. He answered to various questions raised by the audience ranging from his experiences in fighting against unethical labour practices to how TUs can work as a liaison between employees and HRs.

The forenoon session was conducted by Dr. Krishnakumar – President, Forum for Psychotherapists accompanied by Jasem Fathi, the union’s Secretary for Tiruchy district. Dr. Krishnakumar exuded confidence to the audience how unity amongst workers can win their rights. Like IT industry, industry of physiotherapists is a highly unorganized sector and has their own challenges. Since its inception in 2006, Forum for Physiotherapists have been fighting for various demands like setting up a council for Physiotherapists, increasing the number of government job openings in Tamil Nadu from a mere 120 that is existent at present and many such demands. Dr. Krishnakumar and Jasem also answered to queries related to ergonomics and other posture related occupational health hazards raised by various IT/ITES employees. Session concluded after Parimala – President of Chennai Chapter, Forum for IT Employees and Dr. Krishnakumar exchanging pleasantries amongst them and expressing goodwill.

Both the sessions were video-graphed for the benefit of our member and supporters. It will be uploaded shortly.